Another fantastic episode, and Kevin Eldon and all the other cast did a great job! Plus it was great to see Lawry Lewin back, who will play Oliver Cromwell and acted in ‘Amazing Scientists’, along with Dan Li who was the lady in ‘Great Saxon Bake Off’! Anyway, here’s the top 10 pictures from the episode! 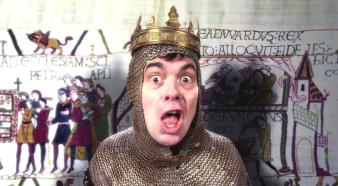 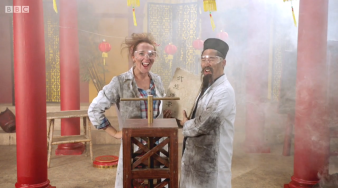 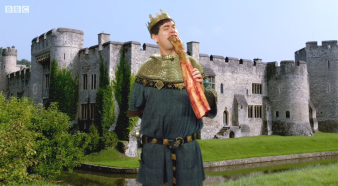 Firstly, did you notice the mistake? William’s got permission to hunt, but not invade England! When interviewed in Battle of the Day he held up the ‘Preservation of Grain Act’ from Series 5 Episode 5,  rather than another document! D’oh! 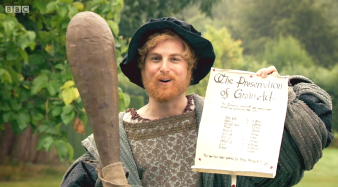 See you next Monday to find out who’s Coming next after Mardy Mary, Queen of Scots! In the meantime check out the Reformation song sung by Rowan Atkinson, for an upcoming episode!

Next Monday, the 1st of June, Kevin Eldon takes stars as William the Conqueror in ‘Wicked William the Conqueror’. Young William, Duke of Normandy, quarrels with Harold Godwinson about who should be King of England, before bashing the English and taking the crown at the famous Battle of Hastings in 1066! Meanwhile across the world, discover Chinese technology light years ahead of the dunderheaded Normans and Saxons in England, and meet one of the world’s first scientists in Egypt. Plus, watch him sing ‘Norman Style’; next Monday-don’t miss it at 5pm on CBBC! Or click http://www.bbc.co.uk/cbbc/shows/horrible-histories for a sneak peak!

One of our earlier posts: ‘Here comes Series 6!’ was slightly wrong. It appears the order of episodes is different-and so here they are, some with official titles:

“We follow the young Mary as she stumbles from young girl in Scotland, to Queen in France, back to Queen in Scotland, and finally to Elizabeth I’s public enemy no. 1 – with a bit of Queenian Rhapsody thrown in for good measure! Meanwhile across the world we meet silver-nosed Danish scientist Tycho Brahe, and Mr H gives us his unique take on the epic Battle of Lepanto in another History’s Craziest Fools”

“We follow Napoleon as he rises from humble beginnings to be the Emperor of France, bashing most of Europe along the way, and ultimately meeting his Waterloo at, well, Waterloo! Meanwhile across the world we meet the Indian traveller who brought Shampoo to the world.”

“We meet the young Henry as he struggles with his boring dad Henry VII, before becoming King himself, and going through wives like most people go through toothbrushes! Meanwhile across the world we meet the great Ottoman leader Suleiman the Magnificent in Turkey, and the mad, bad, and very dangerous to know Emperor Zhengde in China.”

“Meet beastly Boudicca, and find out more about the Cut-Throat Celts, and their strange superstitions”

“Learn about cruel Cleo, and her relationship with Julius Caesar”

“See what Cruel things Cromwell got up to after King Charles got the chop!”

“Learn about the Georgian army, and about the King who was barmy!

“Learn about Queen Victoria, Britain’s longest reigning monarch (…but nor for long), young and old”